After updating Space Engineers from 1.197 to 1.197.1, the game doesn't start properly anymore, and is completely unplayable. When launching the game from Steam, the splash screen is briefly displayed. After a little while, a black screen appears (sometimes the SE cursor also appears and is movable) indicating that the game is starting, but after a while, the application quits/crashes and the game fails to launch.

I have done all the debugging steps explained in the comments of this post, including deleting all game files and completely reinstalling the game, and checking for OS & driver updates and reinstalling VC Redist. Keep in mind that the game was working just fine before the update, so something is definitely broken with it.

Edit: Event Viewer logs additional warnings when running the game, so included those in the SE_crash_eventvwr.txt file.

thanks for letting us know! We are not able to reproduce it on our side so far, but currently investigating with the logs you (and other players) provided. Thanks for that and for your patience.

Hey, and thanks for the info!

I did a bit more digging, and after attaching WinDbg to Space Engineers, I found that the game gets stuck in a constant loop with this instruction:

This is also the same exception code (0xc0000005) that Windows Event Viewer reports, so definitely has something to do with the game crashing. If the devs need any more information, I'd be glad to help debug and solve the issue!
URL
1
Grey-fox-13 ● 11 months ago

I am also having the blackscreen crash without error and had a lengthy conversation on steam forums about it so you can get an overview of things that were said or done to fix it.

And if you can't reproduce it, you can for all I care literally remote into my pc if you think that could somehow help.

Does everyone with this issue have an NVIDIA GTX card? I see that Grey-fox-13 has a GTX 1070 as well as me, Antti has a GTX 1080, I see some other threads have a GTX 1660 Super, the common trend seems to be GTX cards. A friend with an RTX 2070 had no issues with this update.

Again, more digging: adding -skipintro as a launch option makes the game get to the screen shown below. However, the game is still frozen and doesn't respond to mouse clicks, and crashes after a while. Sounds load and play also. 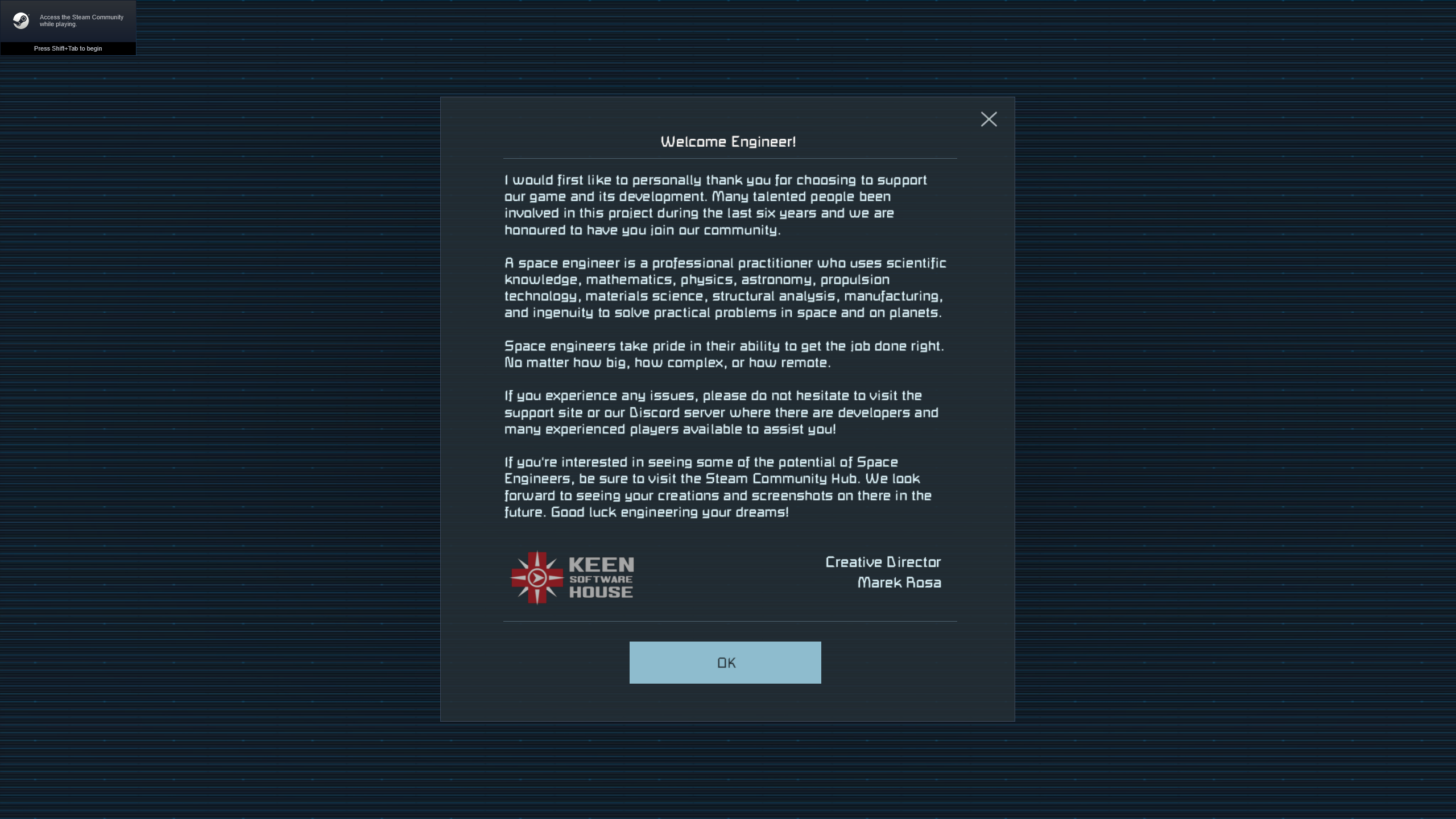 After a lot of digging, I seem to have found a semi-stable workaround for the crash. Using the -skipintro launch option in combination with deleting or renaming the /steamapps/common/SpaceEngineers/Content/Videos folder seems to get rid of the issue most of the time, for me. Your mileage may vary, but please try and see if the following workaround works for you.

In regards to this, after many hours of decompiling .dlls to try and get the crash dumps to show some viable information, I've found out that the culprit is in \SpaceEngineers\Bin64\VRage.Platform.Windows.dll, in namespace VRage.Platform.Windows.DShow. The internal class MyVideoPlayer has these lines of code:

DISCLAIMER: The decompilation was done solely for the purpose of debugging the issue and trying to solve it, and in no ways am I trying to breach the EULA or use the code for any malicious activities. Just trying to help here and get the issue solved!

Please reach out to me here or via my Discord (Kopo942#6666) if any additional info is required.

Well that worked for me too, thanks Antti for the workaround solution!

That's another confirmation from me. Skipping intro and deleting video files got the game running as intended.

Adding to my own comment: as I said, the solution is semi-stable. If nothing is clicked in the main menu for multiple seconds, the game might crash with another access violation. This time the game generates a proper crash log with a stack trace, see the file attached.

after changing to windowed mode in the cfg, i got to the same issue you seemed to be having however the suggested fixes arent working, updated my ticket with the new info and just waiting on a response from keen

Antii, Thank you for posting this workaround. This has the game working for me now. Too bad Keen hasn't been able to find this simple suggestion to provide users at least a workaround until they figure out the root cause. Can't help but think Keen doesn't take it too serious to resolve issues they caused to break their game.

This worked for me as well... The issue has to be centered around NVIDIA cards... In the same day I had an AMD card and NVIDIA card and the AMD card worked and the NVIDIA one did not. WAS able to replicate, I put the amd card back in and the game runs fine again. nvidia card is the issue. (have tried old drivers new drivers and EVERY fix the support people have mentioned on THIS page. Thanks again, hopefully this issue will be fixed.

This worked for me!! After disabling my second display, changing settings on my display, turning off and ending the processes for my VPN, disabling my firewall, unplugging external drives, uninstalling & reinstalling multiple times to my C: drive, editing and deleting the .cfg file multiple times, deleting my shadercache folders, downloading and reinstalling multiple Microsoft .net frameworks, verifying files through steam multiple times, checking all my drivers are up to date twice, and restarting my pc like I did it for a living, this FINALLY worked!!! Spent an entire afternoon troubleshooting just to enter a command and skip the intro..

Thank you so much Antti for posting this fix for all of us here, in addition to those who didn't create a Keen profile yet found themselves on this webpage. Your efforts have not gone in vein!

I had this exact problem with the game and managed to sort it with the solution suggested above:

"sing the -skipintro launch option in combination with deleting or renaming the /steamapps/common/SpaceEngineers/Content/Videos folder seems to get rid of the issue most of the time, for me."

I opened a ticket before reading this here.

Many thanks to Antii Koponen!

i had the same issue. got it to work by making another windows user account.

i seem to be having a similar issue, the splash screen opens up but then after a few seconds the game crashes. this has been happening and i have been sending the logs to Keen with zero response, none of the suggestions you've made have worked unfortunately, none of the suggestions I've received from the discord have helped either. It was suggested that it could be crossplay causing the issue hence the 2 logs, one with and one without an active internet connection.

Ok, this needs to get fixed, Without all the technical difficulties.

We are sorry that you are experiencing this issues. Thank you Antti for your workaround and logs, I'm communicating with our programmers. Unfortunately, we have not been able to reproduce it yet.

Can you all please write here your PC specifications including your drivers version?

You can check my problem report for more information!

Somebody else also noted the repeating trend of GTX cards, computers with RTX cards worked completely fine according to him.

Other (slightly) unusual things about my system: I have Space Engineers installed on a separate (non-SSD) drive.

The workaround (-skipintro combined with renaming the video folder) worked for me.

Experiencing the same issue with an i5-4590 and GTX 960 that has hundreds of hours in the game.

Logs were useless. Updating nvidia drivers to latest, rebooting, and reinstalling the game had no effect.

This workaround https://support.keenswh.com/spaceengineers/pc/topic/critical-v1-197-1-game-unplayable-crashes-to-desktop#comment-46580 is the only fix for now

Thank you all for the information!

Thank you all for the information. We're sorry to hear that you're experiencing issues.

Before taking any of the steps below please make sure that your PC meets the minimum system requirements:

The kernelbase.dll crash occurs in a wide range of games and apps in general. The crash isn't typically caused by Space Engineers and may be the result of a system issue. Hopefully, we can provide you with a solution to your issue quickly. However, we may not be able to address your issue until a future update or hotfix to Space Engineers.

In the meantime, please take the following steps:

Please follow these steps and let us know if it helped you. Thank you.

How can we take any support serious with that last reply, are you a bot?

You replied with the exact same thing on my post!

Coincidence? I THINK NOT!

I retract my last statment.

Do you still experience this issue? Have you tried the suggested steps?

i had the same issue, tryed the -skipintro and deleting videos and reinstalling VC destro latest, and updating windows and grafix drivers but the only thing that worked was making a new windows account and logging in. t is related to that registry point that someone had already mentioned above.

EDIT: i found an easier solution, it has nothing to do with code editing or complicated regediting, after lotst of digging arount and experimenting you can simply go to the spaceengineers folder in Roming directory and copy it all to a safe location then delete it, then restart steam restart space engineers it should work (with -skip intro and video folder deleted) then exit game, exit steam, put back all the files you saved in safe place to thier original folder EXCEPT shedarchach. start steam, start game , you will find your games and mods all where you had left them!

Thank you for your reply! I'm glad that creating a new windows account solved your issue. Also thank you for provided workaround.

I'm unable to provide any new comments other than the issue still persists in 01_198_024 and is not outdated.

Thank you for your update. I'm sorry we still weren't able to find a solution for this, I'm reopening this issue. Can you please attach here your logs from the latest game version 198.027?

One more question, I assume there won't be a dialogue after the game crashes (abut sending logs)?