I's seeing increasing memory use after a few laps on the race track linked below. Every time I reached the finish line and reloaded a save game with me at the start. After about 6 laps (which takes about 1h 30m) the memory use looks like this: 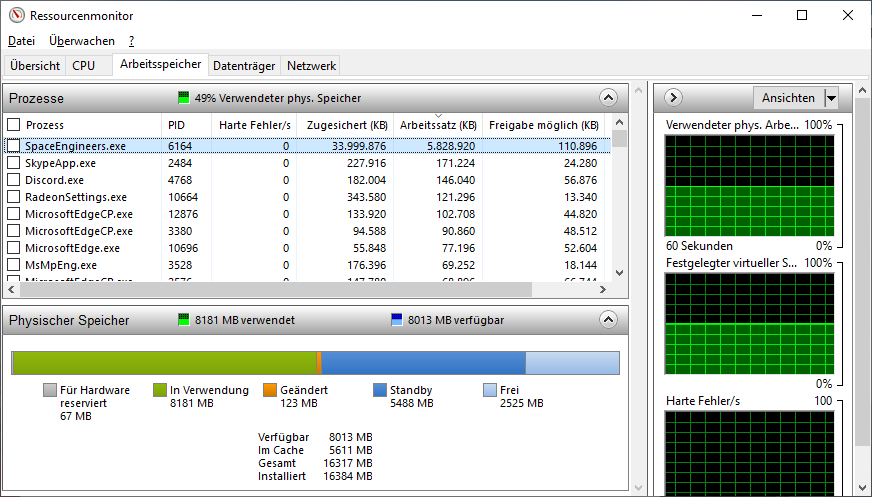 When I originally had crashes due to memory leaks and created the save game, it was 06/26/2019. I think since then it got better, as back then I would notice the swapping on the first lap already (stuttering) and now it seems more concealed.

EDIT: The difference may come from a change I made to the pagefile: fixed size of 62.5 GB now instead of system managed, which would be the default.

Drive several laps on this map and the memory use should start to increase:https://steamcommunity.com/sharedfiles/filedetails/?id=1772272553

After each lap reload with F5 to start the next one. After lap 1 or 2 memory use may drop slightly, but in later laps it wont come down again.

Disable the swap file and drive for 4min 30sec on a 16 GB system. (Quick access: Win+R: SystemPropertiesPerformance /pagefile) The game should crash (or at least it did that back in June ;-) ).

Thank you for your feedback! Yourtopic has been added between considered issues.

Please keep voting for the issue asit will help us to identify the most serious bugs.

I have this PC:

Geforce Experience was known to set the voxel detail in SE to "Extreme". Can you check your game options to verify that this is not the cause? If the voxel details are "High" or less, you should upload the contents of a save game folder (don't need the backups) so it can be reproduced.

Hello, the voxel is set to extreme