For the player it would work just as random ship encounters, but as ship wrecks floating in space. The system would take blueprints of completed ships, then spawn them partitially in random build states.

A ship blueprint will be chosen, then randomize each and every block from 0% built to 100% built. It would then spawn the blueprint looking like anything from useless hunks of metal to semi-working ships floating around. Ship wreck fuel and battery power could be randomized. Ship wreck blocks on/off states could also be ranomized.

Having this feature would benefit gameplay by adding more things to find and salvage in space (or on planets). Since each ship wreck would be randomized in it's wreck state, each wreck find would be unique and more exiting than knowing what's going to show up. This would work for both space and planets. Ship wrecks could spawn in space, or half buried in the ground on plantes. 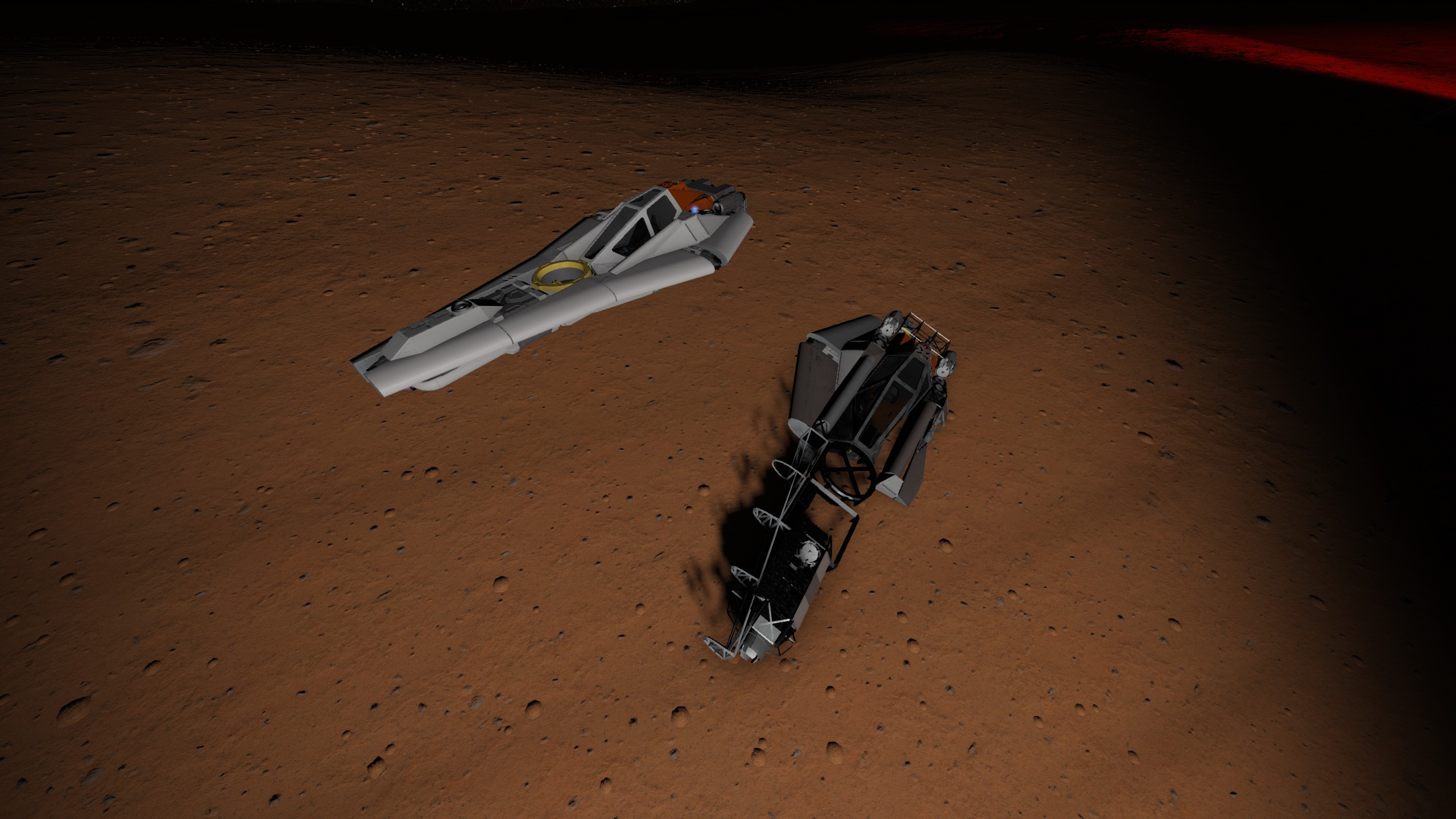 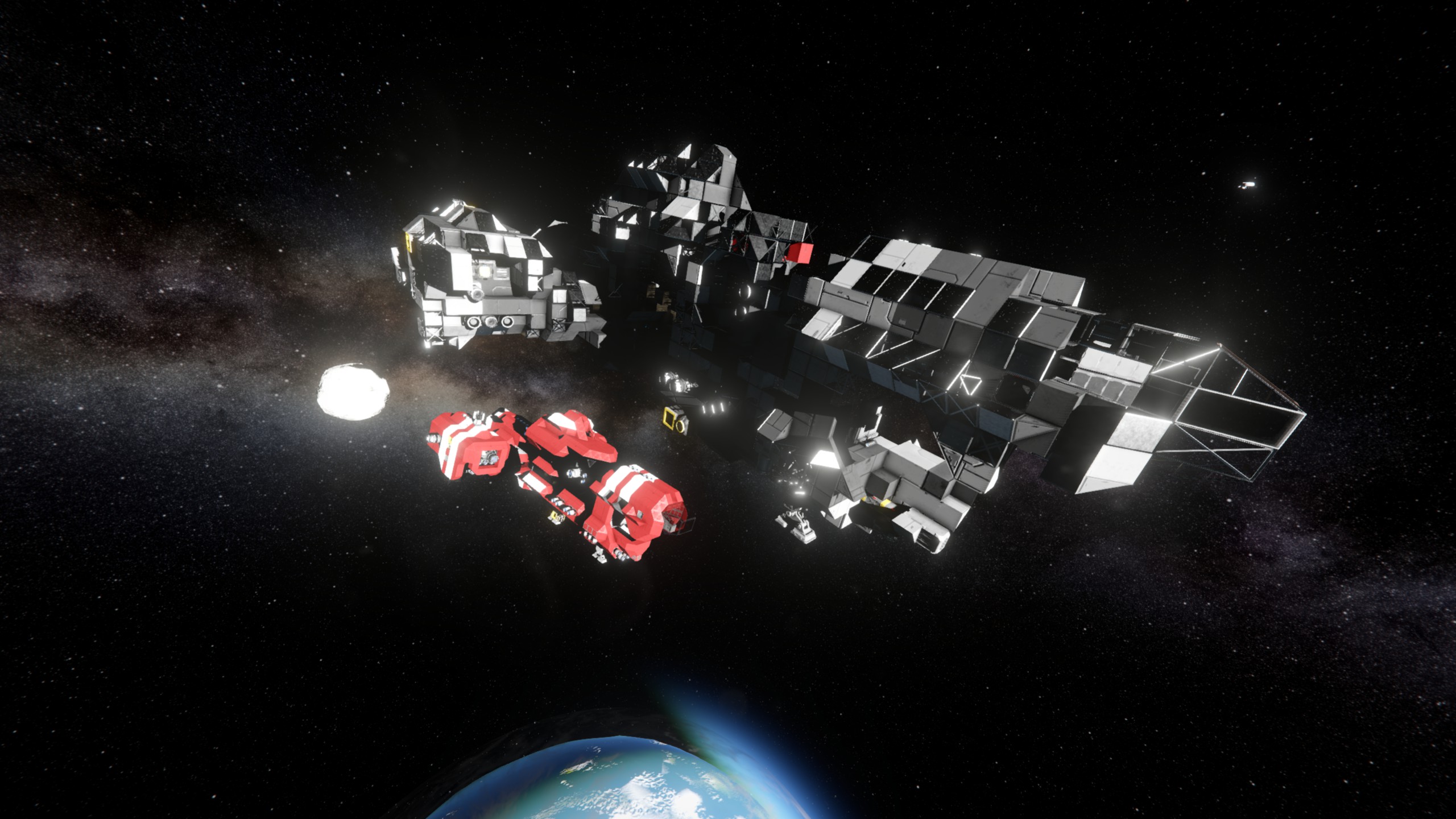 Same blueprint, but one spawned as wreck. Everything that has been done on the screenshots above is:

1, Grind random blocks. (This would be randomized)

2, Spawn in ground or in space. (Angle should be randomized, with some minor rules for planet wrecks)

4, Maybe even remove voxels inside of ships where rooms are still able to be pressurized?

This feature could potentially add some more gameplay. Large ships wrecks might have to be very rare, but remains of smaller crafts could be more common. Thanks for reading.

I think this would be neat feature, but I think the grinded ships don’t really work. It should be replaced by:

Crashed ships should have damage on the bottom and nose. But dented in like if you crash your ship normally. The terrain should have a trail like as in the picture but without the flames/

Ships flouting in space should have different variation like:

A ship with evidence of being boarded by pirates, grinded doors, stolen resources dead astronauts, grinded expensive parts like reactors and jump drives, that kind of stuff.

A spacecraft with a big hole in the side of the ship so that all the air leaked out and that killed the crew. This kind of ship is a lot more rare and has all reactors, jump drives and cargo that where not to close to the hole untacked and loot for the player. Maybe the hole was caused by a reactor explosion, an asteroid or sabotage.

A big ship that crashed head on into a asteroid. With half of it destroyed by the inpacked

.And if you get within a 10km range of a wreck you can get a destress signal, like a beacon on the ship.

This could work, But i think it might feel too "same-ness" It would be nice if it took the ship (With the special Exploration tag in blueprints on the work shop everyone seems to forget about, Asynchronously start to (slowly) run damage calcs applying different types of damage, if on a planet, and the ship has no thrusters of type hydrogen, it would damage the front (Computed via control direction of control block(s) ex: Cockpit) To make it look like it crashed, And randomly select a surface (Not block) to apply a AOE & blockcount deconstruction effect, with it's range being a random from 1 block to 3 blocks dia, and max of 1 block to 8 blocks damaged (Being cube locations, Not models, Example: A refinery (Being 2x2x4 (16 blocks)) would count as 16 blocks of damage, Not 1, And also have a secondary randomizer that has a 20% chance of skipping a block

As it would do this slowly, Not all at once, the server could choose a time to spawn it, perhaps using a similar system to the contextual music the game has, If a player has not been interacting and seems to be "winding down" Perhaps leaving, (It would be a good AI challenge for your buddies) It *might* spawn that prefab it generated a few hours ago...

This logic would create some very interesting ships.

But i'd personally want them to wit until they have the game running buttery smooth, before that potentially add more performance degradation.

It sounds like a really cool idea, maybe it could also conjure up random blueprints from the Steam workshop under specific "Vanilla" tags to prevent it from getting old? As well as make it so it has a chance to be from the pirate faction as well, so as to give you that little "Is it actually down or will it try to kill me if I get too close?"

imo this wouldn't be too hard to implement from my own experience with coding, the only thing is it would eat up Data super fast if you only had Satellite or mobile (like i do )

i really like this ideal, i was working on a mod that spawned damage ships in (BATTLE TORN) but somthing like this would be way better since it takes me hours just to add a few ships. also the exploration tag was put in place for this. all those ship should be vinilla but are not

I have been playing with modded thrusters just a block one for radiation one for fire and one for electrical it just damages a 1x1x1 area I.E you place these blocks on a ship so you could have it under say a reactor or the floor made from these blocks and set to a timer/sensor to switch on blocks and it will constantly cause damage to reactors etc so you have constantly have to repair your ship whilst taking player damage if in these areas.

These blocks do not require power (Except the Electrical Block) and do not produce thrust to move the ship but just add another challenge for you to manage your damaged ship.

Still a Work In Progress.