Brief Background: So I last played Space Engineers seriously back around the planets update (1.108), so I spent most of this test exploring the "Learning to Survive" Scenario.

I did later also briefly try the Earth survival progression start; but honestly found it too difficult to be fun. In particular it appeared to be next to impossible to find/mine ice in the desert biome I was dropped in.

While liking the "Learning to Survive" Scenario a lot, I think it need some more work to make it friendlier for true newbies; I ended up using my "pre-planets" knowledge a lot to make progress. Here are some specifics suggestions:

1. Have way to re-show/review Good.bot quest instructions on demand; sometimes I would forget what it was trying to get me to do (or more likely I misunderstood it.) Maybe add them to the bot chat history or have a "Quest" log

2. It's hard to find all the quests and reach the end; maybe set a GPS or special beacon text on whatever task you should "ideally" being doing next?

3. It's not always clear as to when you've completed a quest; or if you've found all the quests on an island, again maybe changing the colors of the lights or texts on beacons would help. Maybe also put the "islands" a bit closer or leverage GPS more.

4. I was unable to get all the way to end, because I think eventually both Good.bot and I got confused what was left to do. Some sort of quest numbering/order and/or summary status info would have greatly helped. Got pretty far though.

5. Finally, Exiting the pilot seat on the large ship would often put me outside the craft. Probably not what is intended.

Will probably try the "Learning to Survive" Scenario again sometime -seeing what's in it through the Visual Scripting editor I'd really like to reach the finale eventually!

P.S. One the main reasons I dropped out around planets is that was when the engine source code stopped being updated on GitHub... I really liked having a debug build to find/solve issues/crashes. However SE does seems to be a lot more stable now.

5. Yep, happened to me too. Not fun when not wearing your helmet ^^

1. Ah I see what you mean - in the 5th category down called "Good.bot tips" some of the quest messages appear - but not any the active or previous quest instructions - and not in timeline order. I see now that I "failed" the projector (Objective 03_02) task: 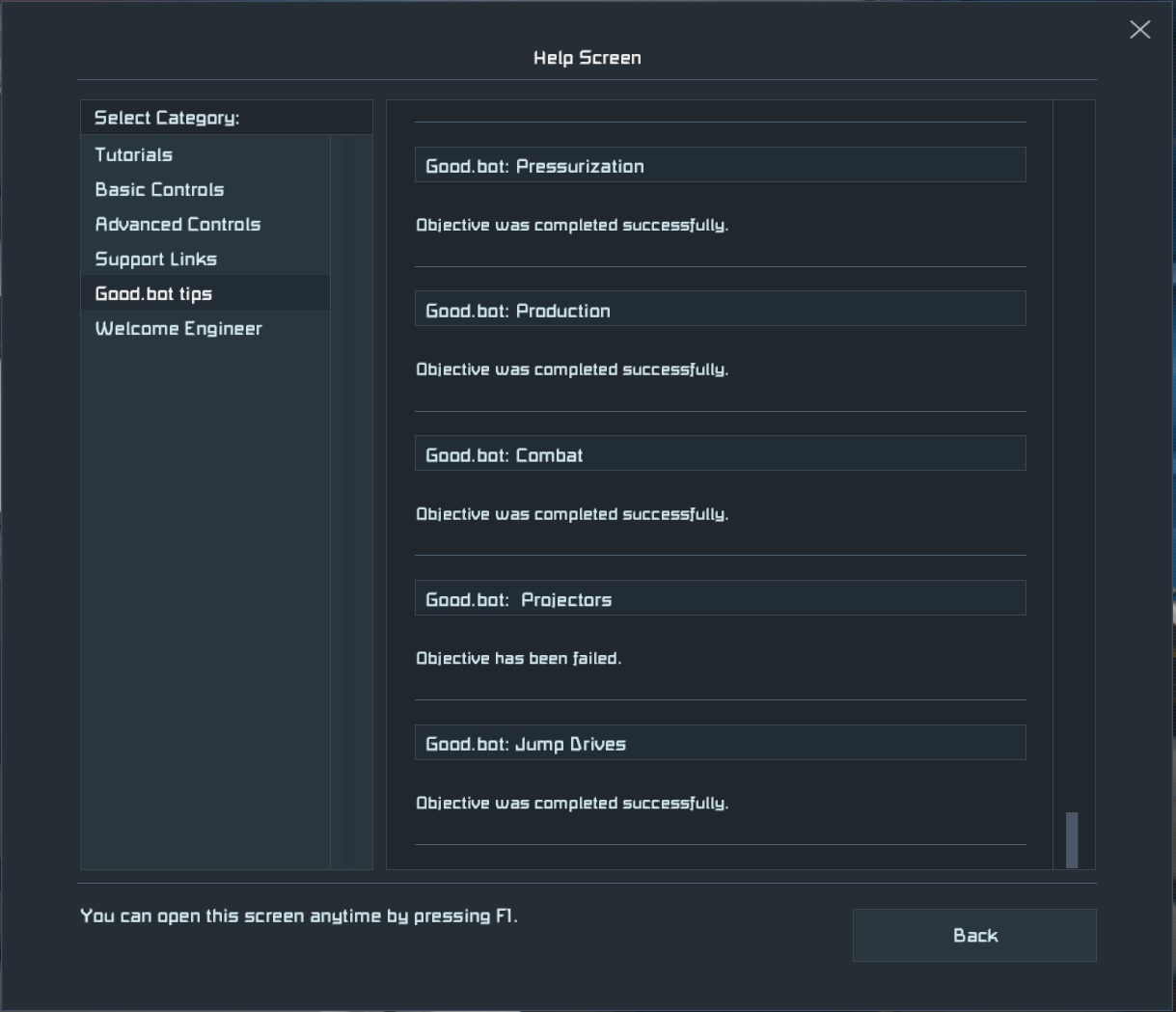 The applicable workflow/state management in the visual scripting tool seems to suggest that it's just looking for a "completed" status and not "success" or "failure", so if I can locate the "Remote Control" (03_04) site then maybe I can get to the end anyway.

Update: No I definitely broke the scenario - found the "Remote Control" site, but the button refuses to function. Could be a number of reasons why - I'm unlikely to figure it out before the test ends in a few hours.

Just another quick note - would be nice in a pinch to be able to quick recharge suit power from power generators or batteries; or do a "personal battery swap" like you can with o2 and h2 bottles.

So, I'm not a newbie, but I have a good abillity to put my self into the shoes of one. I'm writing repair and install instrucitons in my job. So I know how to do that.

I did the Learning to Survive scenario for the time I had. So I can give you feedback on that.

The first thing the player should know is where he can find the good.bot text after the fact. It should be the first thing/task to do. Open "that" menu and only then the other task's will unlock to start.

For the starting Platform:

Good.bot should explain a little bit what the Survivel Kit is doing for you. Healing, Energy and Respawn. And If you want to recharge the Oxygen and Hydrogen from it you need to connect a H2/O2 generator via piping and that you have to fix the pipe. Give the player a hint where he can find the repair material for the fixing of the pipe. Also explain how the H2/O2 gen works. Provide some Ice on the start astroid to mine. Also explain the O2/H2 bottels.

(At this point the player should also understand how to transfer parts from the character to an inventory and all the ways to do so. (Drag and Drop, right click and amound and so on).

(Suggestion, give the player not enough material to fix the pipe so he has to gather material and craft it in the survival kit. ((Good.bot has to explain that)) Explain how the survivel kit can turn stone into material that then can be used to craft the necessary parts to fix the pipe. For that the Asteroid should not have Iron ore but only stone.)

The Energy gathering should be explained on the solar panal task a bit clearer. The Solar panels should not need any fixing. But explain how the batterie behave when you first build them and what happens when you grind them down( The loss of the battery components, Big anoying rookie mistake and they will not understand what happend to the components).

Give the player an explenation on how to fly it. Maybe use the seat to trigger the explenation. Also the gps Signals should be explained and that with the "Alt" butten you get more information. Because most of the signals are just showing up as "2-Signals."

Mining ship tutorial should have the Tier 2 Refinery and Assembler and the Tier system should be explained.

Explain that the small ship is locked to the station via landing gears and you first have to unlock them ( Landing legs are in Autolock modus. Not ideal for the tutorial, when you go too close to the asteriod you are stuck again and have no idea why.)

Explain left click and right click mining and that it is faster to do the right click if you just wanna dig without gathering recources. (example: good.bot:" Use the miner to break true the stone wall in front of you." Wait a bit and then go "Hey that's slow, try right click. It doasen't give you any material but you will break free faster.)

- All blocks you need should be already in the hotbar and the G-Menu should be explained.

You should be able to extract ore from stone in highter tears. Don't give more recources but make it faster. Just so you can get rid of all the stone you normaly gahter. Especially true for Planets.

That's as much time I hade yesterday, I hope my feedback helps.

Re: "Good.bot should explain a little bit what the Survivel Kit is doing for you." I agree, it was not obvious to me that I had to point at the half-covered (!) side (!) of the rover block and press F (!) to recharge.

Also I met a desperate newbie who did everything right, except her blocks did not touch, meaning her solar panels worked (green lights), but the power was never transmitted anywhere, and she couldn't find out why. I do not recall GoodBot explaining this important fact.

The scenarios' contents are great, but their titles need to reflect better what newbies should expect: