Without scripting we currently place a timer block for each list of actions. This comes with some downsides. They cost 25 PCU each, they add weight, we don't always know how many we need and where to put them and having to move them means to destroy their script.

The reuse of the toolbar code for action sequences also causes friction for the player as it doesn't allow us to trigger the same action twice on the same toolbar to change a value incrementally. Instead we have to place them on different pages.

My proposal is to make action lists first class citizens and store them collectively in a single programmable block, which would show an additional [Action Lists] button that opens a dialog like this: 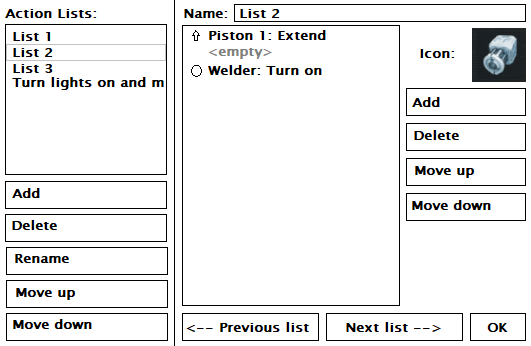 The elements in the list to the right would be the same as on the toolbar with the following benefits:

Inside the G menu, we would pick an action list like we pick a ship tool or weapon: