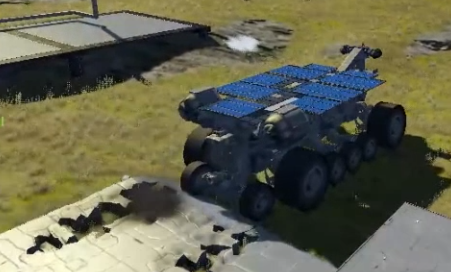 I have to start off by saying that I've spent the better part of last night trying this out and testing different approaches to try to narrow down what is actually causing this bug. Hopefully I've saved you some guesswork ^^

After leaving the truck pictured and coming back the wheels go through armor blocks like a hot knife through butter. Sometimes it breaks after going out of sync range, sometimes after an nondescript amount of time while still being within 3 km and working on the base. The most reliable way of reproducing this - every single time - is to spawn in space and fly down to "a_neobum's" base, get in the truck, press 1, 2 and 9 to disable the parking lock, switch off recharging and disconnect the connector and try to drive off of the platform it's standing on (Save file attached).

The strange thing is that if I repeat the above but instead use the "teleport to player" function in the admin menu, it always works flawlessly and never breaks. I tried it at least 3 times both ways last night and finally had to record it because I thought no one would believe me otherwise :P I thought the server might not have been able to cope with streaming in the truck fast enough but teleporting there and trying it out as fast as possible does NOT make it destroy the blocks and the server CPU usage and RAM usage are <60% and <9GB respectively. However RAM swap-space is hovering around 20GB which looks suspiciously high. 32GB total swap-space on the system SSD +some more on the other drives.

The youtube video provided shows this clearly. Going from fresh server start up until the bug occurs twice to show the difference. Blocks start to "melt" at around 0:50 if you want to skip ahead.

Last thing to note is that the weight of the truck is ~1000Kg lighter when the bug occurs. 1'198'641Kg when wheels are destructive compare to 1'199'586Kg when they work fine, which is another oxymoron I can't get my head around since a lighter truck should be less stressful to the armor blocks. Clearly something is wonky with the weight calculations after disconnecting from the base connector.

Have a nice day!