My desktop/native resolution is 1366x768. When I enable "Virtual Super Resolution" (AMD) and pick 1920x1080 in Space Engineers, everything works as expected. What's not expected is that when restarting the game, the resolution resets to 1366x768 although 1920x1080 is also available.

I tried setting the desktop to 1280x720 and the game to 1366x768 and it did not revert to that desktop resolution, so I figure it is a failsafe feature to avoid black screens when the user sets a resolution outside of what the monitor natively supports - but that's what VSR is all about.

Further investigation shows that it always reverts to desktop resolution - even when I set it to lower (e.g. 1280x720) ingame. I found that my SpaceEngineers.cfg has

If I change the above refresh rate to 0, FixSettings() will successfully detect the correct resolution and launch the game in 1080p as expected. So there must be some issue with comparing the 60 Hz from the list of available modes to the 60 Hz from the configuration file. For what it's worth, I use a custom EDID override (required to make the native resolution available over HDMI) and used non-standard values to come out with exactly 60 (non-fractional) Hz: 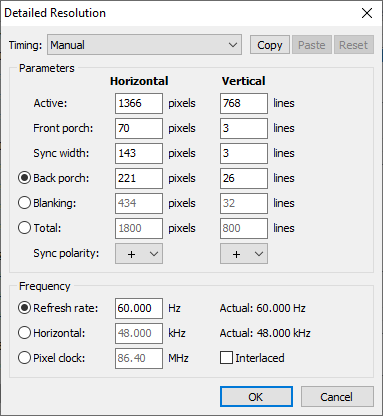 Next I tried conformant timings instead of manual, resulting in 60.006 Hz, and the issue persisted, so that was not the problem.

I switched between two displays today and noticed that the refresh rate in SpaceEngineers.cfg was autodetected as 60000! So the engine expects an integral refresh given in milli-Hertz (e.g. 60000), but the Display Settings dialog sets a refresh in Hertz (e.g. 60). You should probably stick to one system internally, either milli-Hertz or numerator-denominator.