Hello again... So for the second public test* I once again took the path less trodden and focused on testing the "learning to survive" single-player scenario.

However just to remind me I thought I'd start with a quick run through "The First Jump", but I got blocked when the game refused to grant me access to the grinder in the second act: 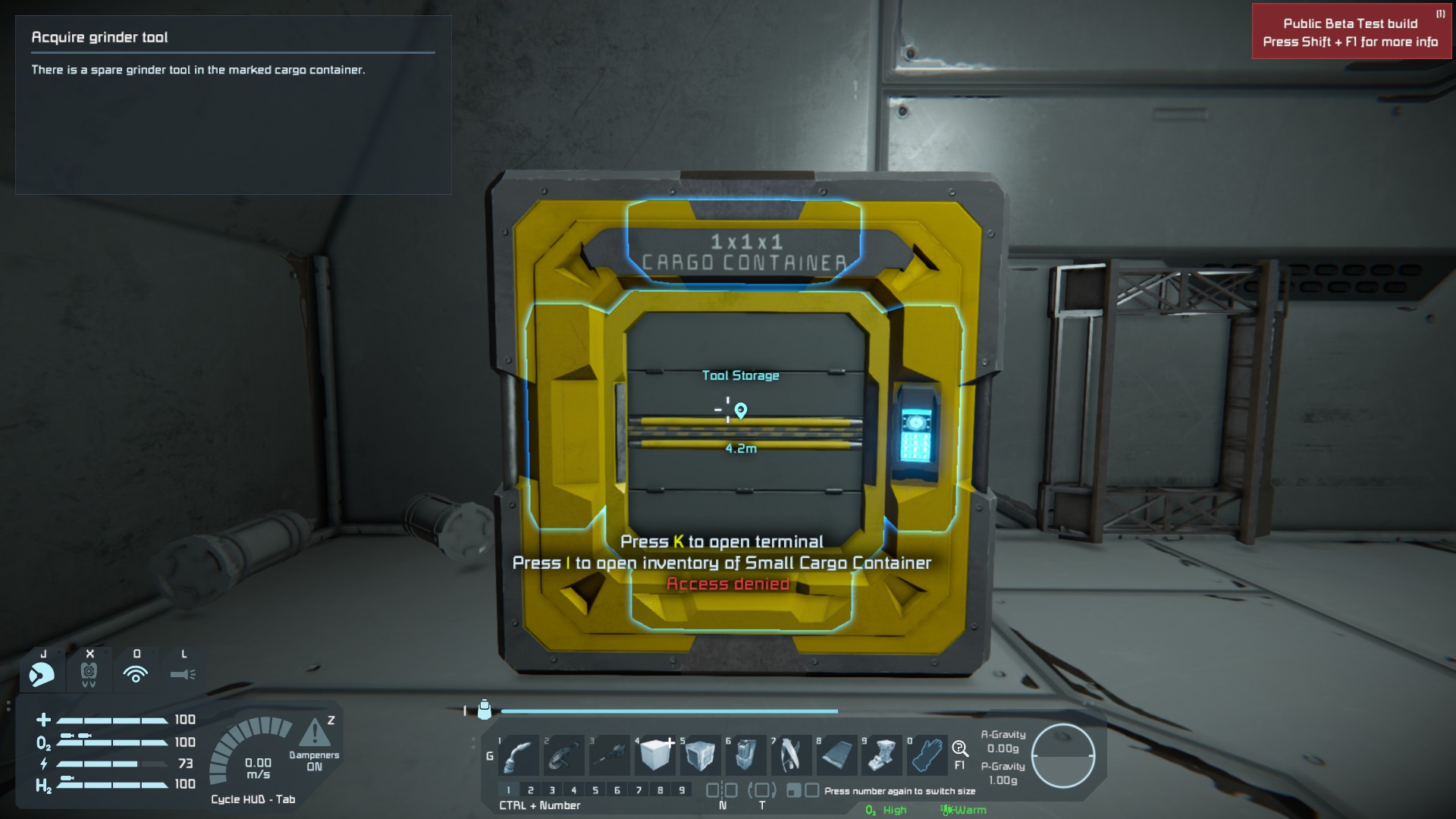 Not sure if this is a new issue or not; but I thought I would reporting it here anyway.

1. The addition of the new orange markers is a big help; however I still was not able to find them all. My "path" was Ship Mining, and Ship Tools, to Pressurization, but that "dead ended", so I backtracked to Production, which then revealed Remote Control and Hydrogen Thrusters, then back to Ship Building (Via Ship Mining), Jump Drives, Projectors and then Combat. But then I was unable to find Weapons (O_02x01) or Connections (O_02x05) to reach the final phase. And boy did I look - even tried using the admin tools and a custom build of SEBuilder find what I missed. So my observations are:

A. Are we sure all the objectives listed in the scripting are in the provided world file?

B. Even with the new orange markers, there still was a lot of searching and backtracking involved to get as far as I did. I don't think the positions need to be in a line, but I think more needs to be done to make finding the tasks easier.

2. In my view there are too few resources and infrastructure on the map to make the trek around enjoyable; particularly for a beginner. I ended up moving around a rather large caravan of ships, supplies (and guns!) just to be able to survive: 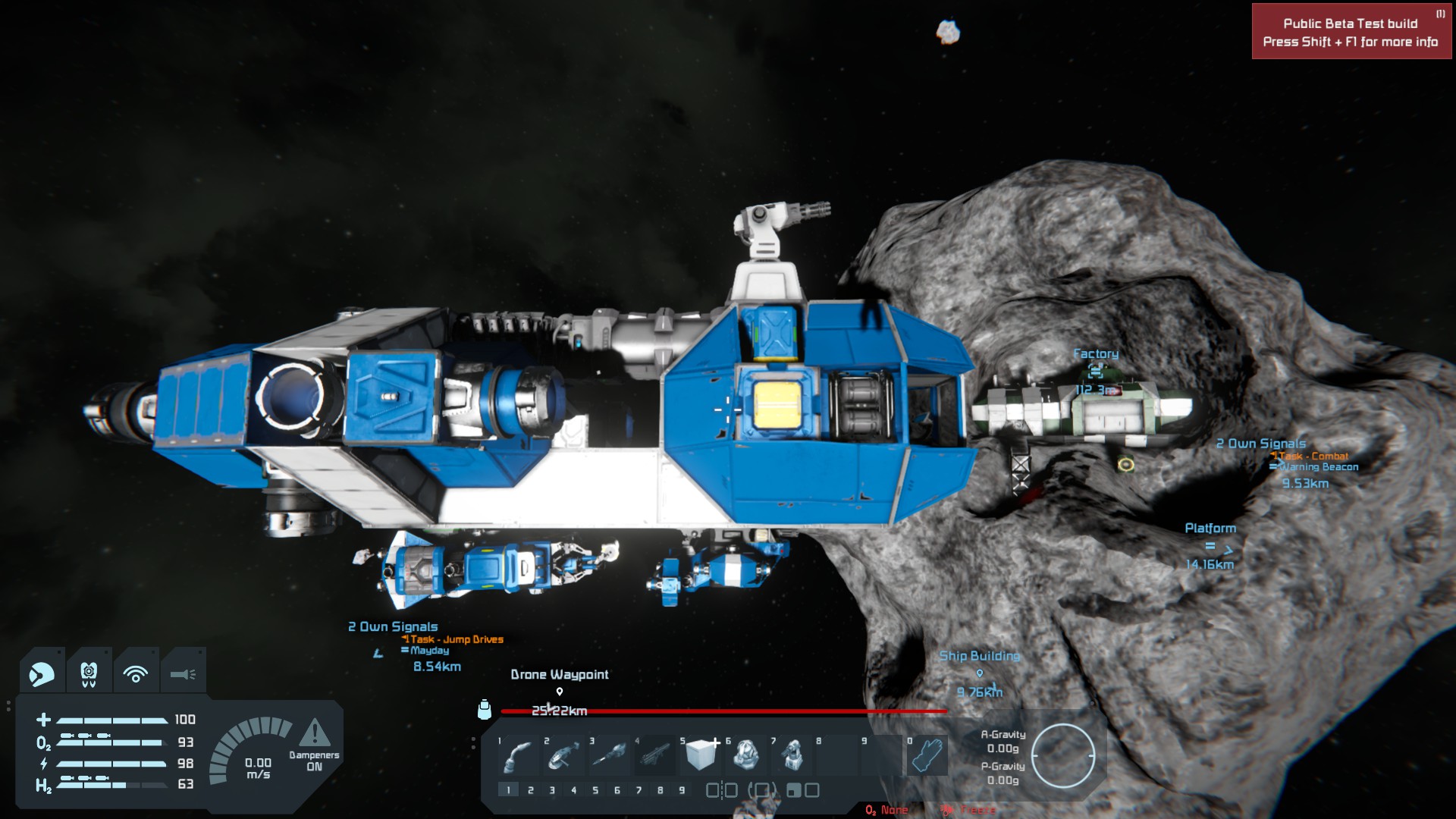 That just seems like too much hard work for for a "tutorial" type scenario to me. Some specifics around this include:

A. It's just too hard to find ice in some parts of the map; and when do find it can be slow to mine without a specialist mining ship.

B. Too few view of the bases and ships have working or fixable O2/N2 blocks/setups; which means you need to have to rush back to start when you get low or drag the big ship everywhere (and keep it supplied with ice.)

C. Too many ships only have/offer batteries for power sources; which quickly drain and go head. Big ship hydrogen generation would also quickly eat all my ice if I did not ration it out.

3. In my view it's too easy to die in an unrecoverable situation - unless you are actively making your own separate save files. This is due to both the auto save being too frequent/unpredictable and the scenario being too brittle. Some situations I ran across included:

A. Killed myself closing a door while I was in the a ship doorway; did not know that was possible. Getting back to that ship if it was in motion would had been a nightmare. Also no medical re-spawn rooms anywhere, and the big ship does not by default have a beacon or antenna (so good luck finding it.)

B. Unless you are very fast and have good aim it's all too likely that the drone ship will take out the "Combat" task button/ship before you can get there to start it. Had to restart quite a few times before I could beat it: 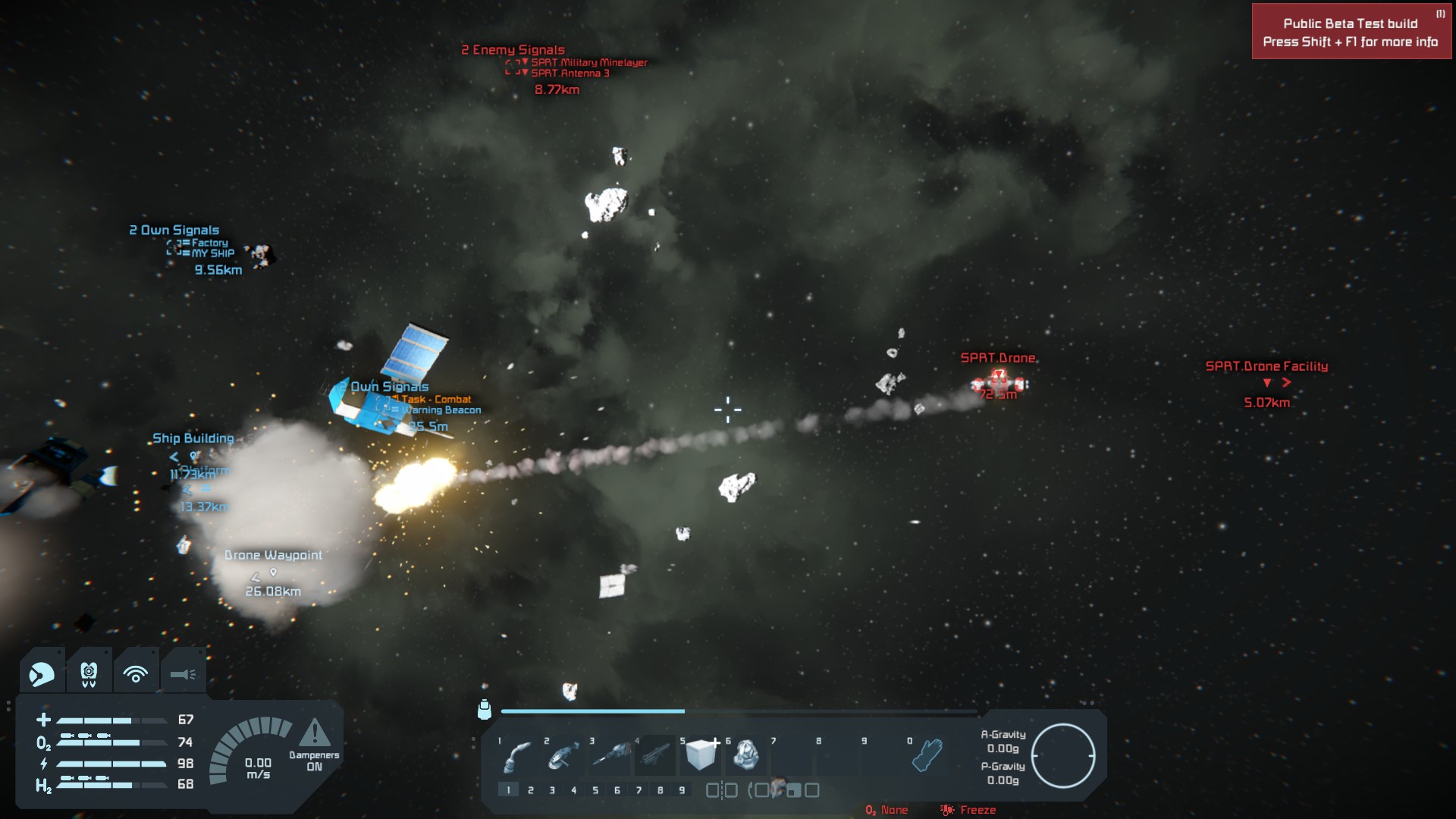 "Hey drone - please don't destroy my task before I can start it!"

4. Some other issues encountered:

A. Task instructions disappear from your screen on an exit/quit and reload

B. Task instructions and the Drone HUD overlap on the screen for the "Remote Control" mission

C. "Projectors" task instructions are too vague; took several attempts to A) find the projector then B) find the button hidden on the back side to turn it on. Also if you don't change the battery settings on the ship to "charge" before you disconnect (and wait for a bit) before un-merging it, then it will float up un-powered and then impossible to move/fix.

Having sunk quite a few hours into this scenario now across the two public test, I really hope the next time I try this I can at least test this through all the way to the end. Maybe you could publish a list of GPS coordinates or something - just as fail safe.

that scenario are very broken

Same bug with the grinder, if you shoot the container and fix it to get the grinder there's more bugs as Dmitri says, the connector will not connect and can't be made to because it's invincible. I've never sucessfully played through that scenario, it always used to ctd on the mars combat mission. I gave it another go because that scenario is how you learn the basic controls, which isn't covered in "Learning to Survive", it should work.

I also have pretty much all the same issues in the "Learning to Survive". The markers especially are really easy to lose and you would miss a lot of the scenario if you thought it was over.

Combat drone is too eager.

All the same issues on the projector task. Mine exploded when I got out of the cockpit after disconnecting it with no power. I dunno if it was the astronaut getting zapped and his ragdoll hitting the ship or something else.

I also killed myself with a door.